It's a privilege for us to have wonderful men and women of God in the Prayer House, people who live a lifestyle of prayer, authority in the Holy Spirit and decication to Jesus and to the nations.

What a treasure to learn from them and to be touched, filled and equipped by the Holy Spirit. This leads us to deeper intimacy and greater authority in prayer and in our walk with Jesus. We invite you to join these »Power Nights« with special speakers.

Here you find the next dates. More will follow throughout the year.

Every Power Night has a special guest preacher. Let us introduce them to you. 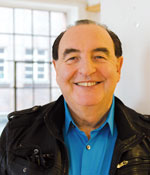 Walter Heidenreich is an internationally well-known and credited evangelist and speaker. After a dramatic encounter with the love of God, which set him instantly free from drug addiction and all bondages, he has given his live to Jesus and is preaching the Gospel passionately all over the world – no matter if to thousands in a crusade, in small churches, on the streets as well as in stadiums. Hundreds of thousands have heard the Gospel message through Walter and upon that have given their lives to Jesus. The marks of Walter’s ministry are the manifestations of the Holy Spirit’s power. His life and ministry are impacted by this power. To many – young and old – he is a spiritual father, especially to young people for whom he is an example in the way he lives out his faith and acts upon God’s word. Walter believes in multiplication and teaches Christians to reach out for the love and fire of God and to do the works that Jesus has done – everything is possible!
Walter is married to Irene. He is the president of FCJG Lüdenscheid and HELP International, and he is ministering and travelling Germany and abroad under the cover of FCJG Horizon, which is a branch of FCJG Lüdenscheid.
Furthermore, Walter is the author of a number of books of which his autobiography »Help – I need somebody« is the most successful. This book has been translated into 13 languages, and hundreds of thousands have come to know Jesus Christ through it. 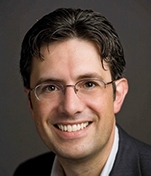 Wes Hall was part of the leadership team of the International House of Prayer of Kansas City (IHOPKC) since 2000, and a faculty member of the International House of Prayer University (IHOPU) since its inception. Formerly a practicing lawyer in the City of London, UK, Wes now focuses his energies on intercession for revival and working to see a culture of prayer established throughout the Body of Christ globally. He has a passion to see God’s people gain a clear understanding of their identity in Christ that would overflow in lives of radical obedience to Jesus in every area of society. He and his wife, Carol, have four young children. Since 2016 they reside in Germany and now he is in the Gospel Forum (Stuttgart) the leader of the Revival Training Centers. 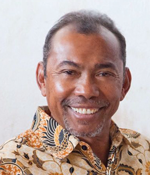 The Power Night with Mel Tari is NOT taking place due to travelling restrictions. Thank you for your understanding.

Mel Tari, a world known evangelist and missionary from Timor, Indonesia, is an eyewitness of some of the greatest miracles that occurred in our generation. Mel has witnessed the dead raised, water turned into wine, healing from all kinds of diseases (the blind see, the crippled walk, the deaf hear, the dumb speak, leprosy, cancer, etc.) and millions that have come to know Jesus all over the world in the last four decades.
He’s the author of the best selling book, »Like a Mighty Wind« which tells about the great move of the Holy Spirit in Asia beginning in 1965. It has been translated into more than 40 languages and millions of copies have been sold.
Mel’s message of simple and child-like faith in the Word of God and the reality of the power of the Holy Spirit today will inspire you to know and love Jesus more. 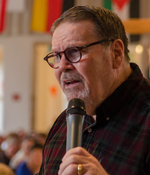 Bobby Conner, this ‚gentle giant' carries a particular anointing and a refreshing sense of humor. His prophecies are sharp and he sets free miracles of the Holy Spirit - healings, signs and wonders - which reveal the heart of the father here on earth.As an unborn baby Bobby dramatically survived his own abortion. Later God rescued him from drug abuse and suicide. His story gives an example of a man, who now lives in in his divine destiny and who's leading others into the same freedom - at any level! His deep and intimate relationship with Jesus is his foundation to sense the acts of the Holy Spirit as he ministers worldwide. The heart of the father, which is displayed by Bobby and his wife Carolyn in a great way, leaves a lasting mark of change wherever they go. Bobby used to be the pastor of a Baptist Church in the South of the US. His prophetic anointing is recognized, confessed and welcomed by most instances of the body of christ. He is called to equip the church, he hears and tells apart Gods voice in todays world very clearly. Wherever Bobby goes he is welcomed and known because of his sensitivity for the guidance of the Holy Spirit. As international speaker he is treasured ans ministers since many years in more than 45 countries.