To receive and experience God's unconditional love and making it known, is one of the most wonderful and most important issues in a disciple's life. It was an encounter with this very love of God that changed Walters & Irene's lives many years ago. By reading the word of God they quickly discovered that God has a plan for them, and that he endeavored to activate it for the good and blessing of so many people all around the world. Since so much has happened: Soon after moving to Lüdenscheid in 1977, they took on the leadership of the FCJG. The ministry expanded drastically - locally and internationally. HELP International with its many missions branches was started. Lots of events and conferences have been celebrated. Over the past years, long-term staff members of FCJG have taken on responsibility for the quickly developing local and international ministries thus releasing Walter & Irene to fully walk in their destiny: Proclaiming the Gospel of Jesus Christ to all the world and equipping the body of Christ to do alike.
After handing over responsiblities to a new leadership in Lüdenscheid, Walter is president of FCJG Lüdenscheid and HELP International.

... for once in Germany, however, also in poor countries. In order to be able to fully walk in their destiny of preaching the Gospel and to accept invitations to poor countries, Walter & Irene founded FCJG Horizon. Pakistan, India, Mozambique, Brazil, Korea, the Philippines, Thialand ... everywhere they go they see conversions, healings, the power and love of God in action, signs and miracles. The harvest is white! 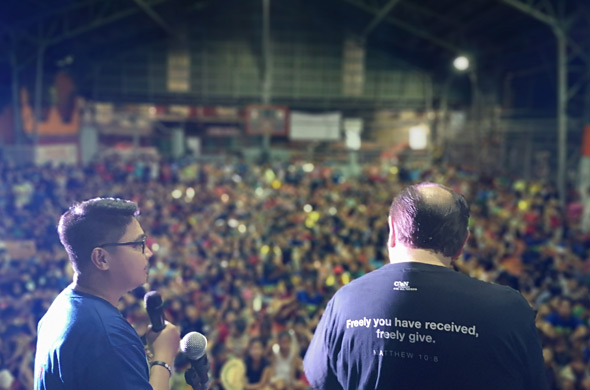 Walter & Irene are ministering to churches, in conferences and seminars, they initiate and support crusades on the streets and in stadiums, encourage the body of Christ and train pastors and leaders. They love to serve the body of Christ without any reservation and of all Christian denominations. Every year they spend several months in Germany and abroad ... from time to time they are going with teams that one can join.


Help – I need somebody

Walter is author of several books. His autobiographie Help – I need somebody is his most successful. Worldwide hundreds of thousands have been blessed and broken through to living faith in Jesus. Help has had several editions and has been translated into 12 languages so far ... more to come.

others about Walter & Irene Heidenreich

"In FCJG, the main thing has always remained the same: To seek and to save the lost. It's a miracle that Walter and Irene have never left their first love to Jesus in all those years, despite the many changes in ministry and their international commitment."
Geri & Lilo Keller (Founders of Stiftung Schleife, Switzerland)

"The power of a seed comes from its maker and His design. The honor of a seed is to fulfill the plan of its maker. Walter's heart has and is fulfilling God's design and power, bringing Him great honor and joy. Praise God!"
Pastor John Cowper (New Wine Church, Placerville, USA)

"Years ago, God took a former wheedhead and made him a successful international evangelist ... despite this truth, there are still people claiming that miracles are not happening anymore. I am determined: What God has started to do through FCJG and Walter he is going to accomplish."
Pastor Volkhard Spitzer (City Church Berlin, Germany)

"We have known Walter & Irene and some of the staff members of FCJG since the early beginnings of the FCJG Community. Every encounter today is as refreshing and inspiring as back in 1978. Thank you and "keep moving on"!
the Sisters of the 'Lumen Christi' Convent (Rödermark, Germany)

"When I first saw Walter, I heard him preach in Switzerland. At first, I didn't understand him, because I don't know German. Then someone gave me headphones with the translation. In a few minutes I could feel the heart of the Father speaking through his words. To have compassion for another life can only come from the Father, and Walter had it. His desire to see someone saved and set free in the name of Jesus has stayed with me all these years. I have learned to love others better, because of knowing Walter and Irene."
Don Potter (Potter House Music, Moravian Falls, USA)

"I first heard of FCJG in the early beginnings of the Glaubenszentrum Wolfenbüttel (now Bad Gandersheim), when a young man enrolled in our bible college after he finished his therapy at House Wiedenhof in Lüdenscheid. We have always appreciated the ministry in Lüdenscheid, and when I met Walter, I knew why! I have known Walter for almost 40 years, and he has never lost his passen for God, God's people and the lost ... Thank God for Walter and Irene and the staff of FCJG."
Mike Chance (Arise!, Germany)

"So many lives have been touched and saved through FCJG. The Spirit of God is at work in this ministry and everywhere I go I hear of how God is touching people in this place. The way God's hand is upon Walter's life is amazing. He is a great apostle and a huge blessing to this nation and to the nations of the world."
Pastor Richard Aidoo (New Life Church, Düsseldorf, Germany)

"When Walter first visited our church many decades ago, he couldn't speak any English, while now he is not only fluent in English but has touched many lives in our nation. His ministry as well as the ministries of FCJG and HELP International are marked by a passion for God, compassion for the lost and a hunger for the move of God."
Jerome Ocampo (Founder of JREV Now!, Philippines)

»Walter is certainly a man of God whose heart is so big that it contains the whole world.«
Brother Sidney (Karens for Christ, Thailand)