Coming to Germany was very challenging for me to give up all securities and things that I was familiar with. I left my home country, friends and family. I had very little money and went into a country I knew little about and couldn’t even speak one word of the language. But the one thing I knew was that this decision is God’s will for me and He has a plan for my life. This decision to come here was and will continue to be life changing.

Being in the Wiedenhof, my relationship with God has grown deeper. In the first few months, I had a real revelation of the cross and how it’s the most important place for us to come to in life. Even though I had heard this in church before, it never hit me and became practical that we can come to Jesus and he will save us in times of need. In my past, I would always to turn to many other things as an escape like drugs, alcohol, pornography, music or sought help from other people. But none of these things ever gave me real freedom. So when I had this revelation and started coming to Jesus with no shame, I could begin to walk into the path towards true freedom. I experienced healing in my heart through learning forgiveness. I came here with a lot of unforgiveness in my heart towards my parents, people of my past and towards myself. This house is specifically focused on Fatherhood. We have many teachings and devotions around different topics of this like forgiveness. Being here I have been able to first, receive forgiveness from the Father, then begin to forgive others and also myself in my heart. This has led to improved relationships in my life and now I can practice a lifestyle of forgiving those and letting go when new offenses come up. 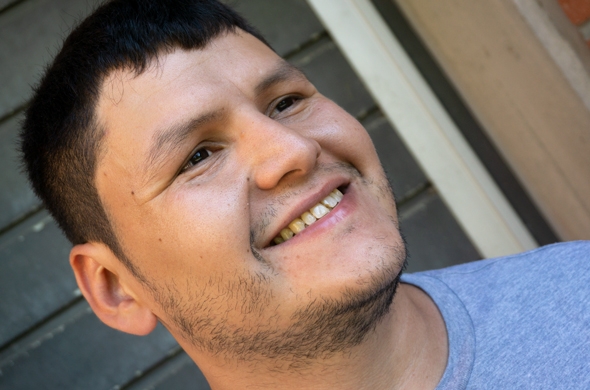 When I arrived here in Germany, I had no permission to stay for 1 year. So this was one thing I had to get. The process was not so easy because it’s not normal for an American to come into the country to get help. They really wanted to see that I could be self-sufficient. Another thing they asked was verification of where my finances are coming from and who the people are. But since I did not have the full amount of monthly support to cover the costs of living here, I really began to feel that the chances of getting approved were small. But I went ahead and just gave them everything that I could provide and believed that God would do the rest. After about 2 months of working with the government, the final decision was made that they would make an exception and allow me to stay here for the 1 year! This was totally a confirmation for me that God wanted me to be here and that he is in control of everything.in my heart I have grown to trust in Him more and know that he is going to sustain me.  Even after I received permission to stay for 1 year, I still did not have the full amount of financial support to be here each month. After about 6 months I accrued 2000 euros of debt that I owed to the Wiedenhof for living here. At this point I didn’t know what else I could do, I am not allowed to work in Germany, so I saw no other route to try and pay what I owed, so I went to God. I really cried out to him and asked for his help because there was nothing more that I could do. The next day I see an email that someone wanted to support me monthly and from then on another supporter saw some changes in their job where they were able to support me with more money a month. Through this I was able to pay off what was owed and I could continue to live here with enough finances each month! God once again proved himself faithful. (Here are 3 scriptures that helped me: Matthew 6:31-33; 2 Corinthians 9:8; Psalm 23:1)

Now, I only have 2 and a half weeks left to go. During my time here, I began to hear God speak to me about staying a 2nd year in Germany. I felt like there was still more to grow in and receive from God so I wanted to act on this impression. I had decided that I would try and stay a 2nd year and continue to live in the Wiedenhof. I went and spoke to the government and asked them about staying longer, they immediately said "NO" there’s no chance for me to continue staying. The first time was really an exception. At first I was not shaken by it but then after a few weeks I became discouraged and started to feel the rejection in my heart so I made the decision to just go home after my 1 year. (But God had other plans) After 1 week of making this decision, the leader of the Wiedenhof approached me and said that there is a way that I could stay in Germany as a volunteer. With this opportunity I could continue to live in the Wiedenhof a 2nd year and help with practical work here. This was a big surprise to me because I thought God had already spoken that I couldn’t stay longer, but I went into prayer to seek him and after about 45 minutes in prayer, I was lifted above my own thoughts and feelings about this situation and realized Gods answer was to stay and seek this opportunity out.

I look forward to this second year of being here in Germany and living here in the Wiedenhof. I know I am not perfect or completed after this year but what I learned here really sets me on the right path for my life.

Jonathon
Go To Top
To increase the comfort using our Website we are using Cookies.
read more