The painting „The Dancing Bride” sprung from the 2018 Burning Hearts Conference. The artist had asked God for a prophetic picture at the conference. Afterwards, this image appeared before her inner eye. She received many further details on the image. The words “The Dancing Bride” were the starting point. However, the Bride isn’t dancing in front of a colorful, cheerful background. Instead, the background is dark and sinister, almost threatening. “The Bride dances, no matter the circumstances!” The different flags stand for the entirety of nations of which the Bride of Christ, the Church, consists. The Bride of Christ doesn’t only encompass the Churches of one nation. She does not merely comprise the “Christian” nations, but all nations. God does not leave out any nation. He is the God of all nations. During the Bride’s dance, flames of fire rise from her body. These flames represent the Holy Spirit. “The Bride dances no matter the circumstances! She brings the fire of the Holy Spirit!” Since the first night of the conference, this prophecy was palpable. People from different nations were worshipping the Lord together and the Holy Spirit was not only tangible, but visible. 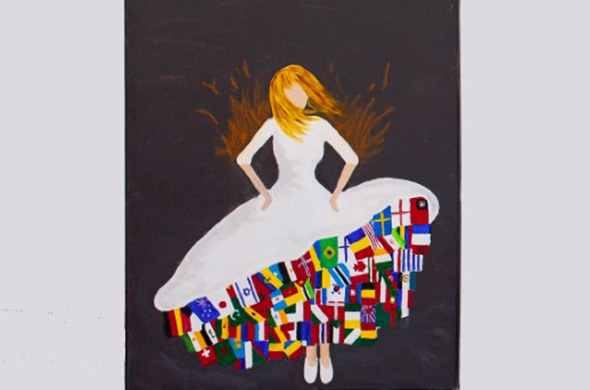